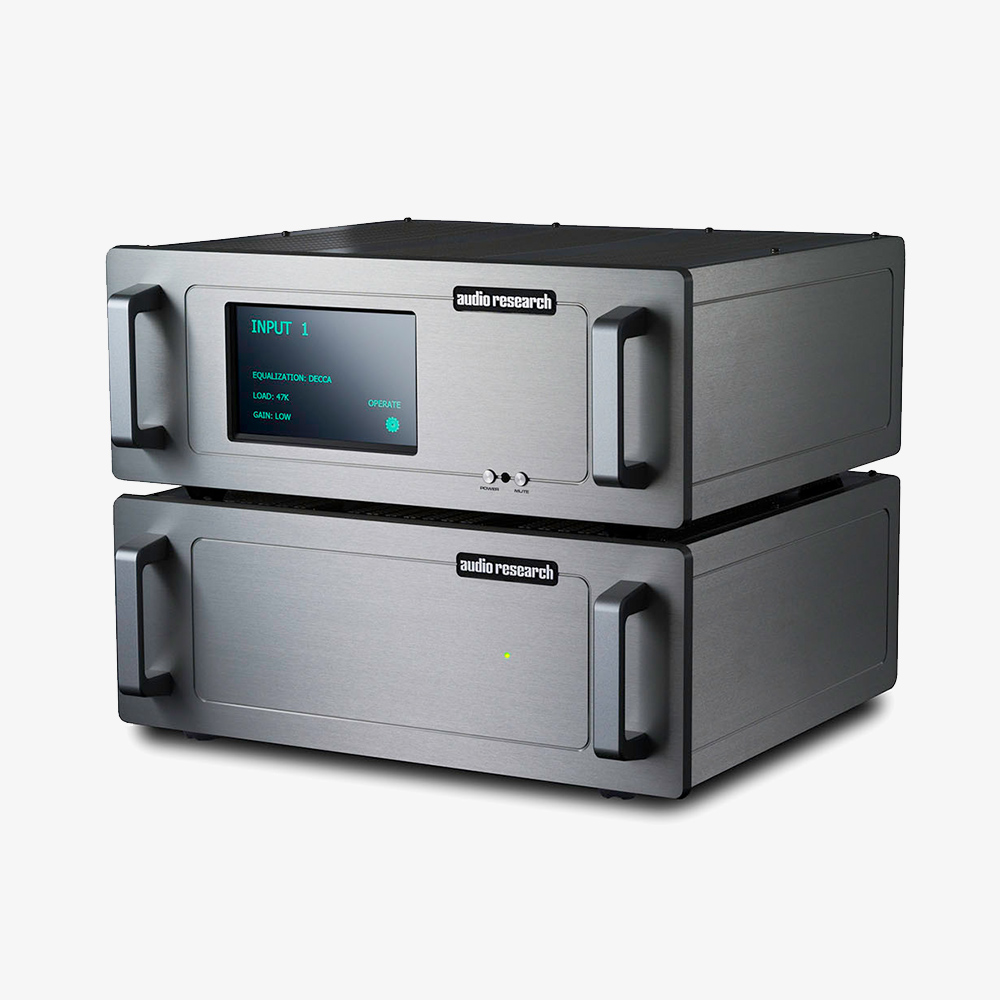 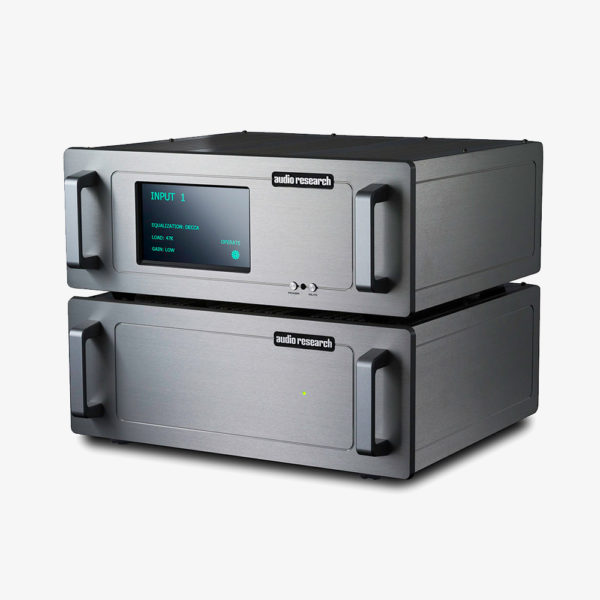 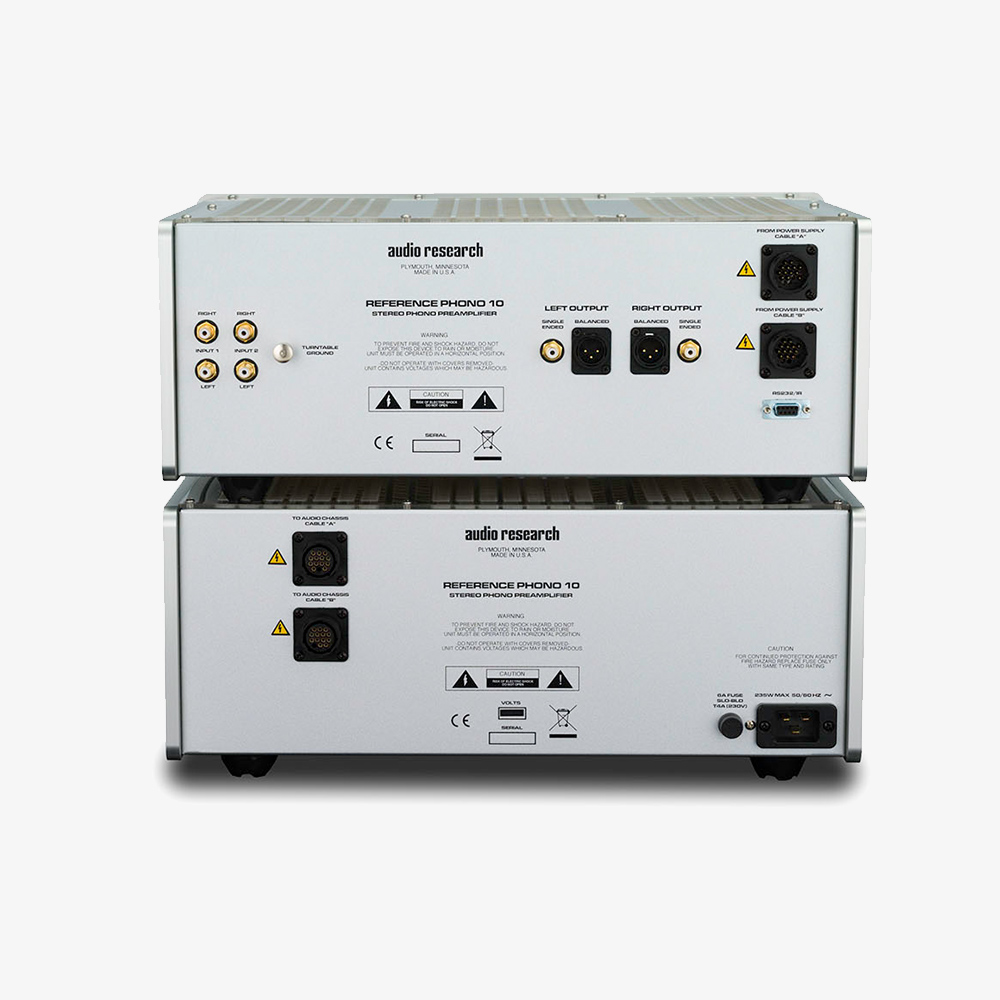 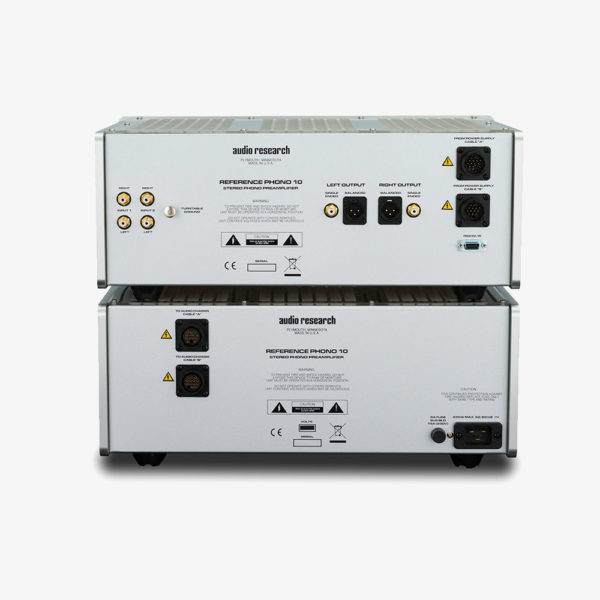 Vinyl record playback has been an integral part of Audio Research since its founding in 1970. Think back to the great phono stages built into the defining preamplifiers of their day, among them the SP3, SP6, SP8, SP10, and SP11. Even after the introduction of the compact disc in 1982, phono sections remained a revered part of their preamplifiers. The first Audio Research phono preamplifier in a separate chassis was introduced in 1992. After all this time, ARC are proud to finally introduce the first two-chassis phono preamplifier in their history, the Reference Phono 10. This model number was designated because it mirrors its line-stage counterpart, the Reference 10, providing an unsurpassed level of performance in its category. The front panel has a 7” diagonal touch screen mounted asymmetrically, and only two buttons for power and mute. The interactive touch screen allows the user to change inputs (and input names), equalization, loading, gain, muting, foreground and background colours of the display, display intensity, and tube hours. Control functions are duplicated on the supplied metal remote. The front and side panels are 3/8” brushed and anodized aluminium, and the tops of both units are acrylic with a laser-cut perforation pattern (chosen for its sonic benefits).

The dual-mono audio circuits are fully discrete, pure Class-A, with zero feedback. The low gain audio section uses eight 6H30 tubes, four per channel. Rather than using a step-up transformer, special high-gain, extremely low-noise FETs are used in the high- gain section. This approach is costlier than using a transformer, but it is well worth the dramatic performance increase. The design is fully balanced, with an input circuit that allows its RCA inputs to operate in a balanced configuration without requiring an inverter. There are two sets of inputs with the same flexibility as the Reference Phono 2SE, including switchable Low and High gain, seven loading options including 47k, 1000, 500, 200, 100, 50 ohms, plus Custom which can be factory-set according to your needs. In addition to standard RIAA equalization, the Reference Phono 10 also includes early Columbia and Decca equalization curves.

From the first note on that treasured LP, its greatness is at once obvious and breathtaking—the Reference Phono 10 is a sonic blockbuster that establishes the new standard in analogue music playback. Emphatically. Great vinyl takes on an explosive, dynamic quality that is normally encountered only in a live performance, whether the crescendo of an orchestra, a roaring rock band, or the intricacies of a solo piano. When called for, the stage is vast, holographic, enveloping: Dimensionality is redefined, with an engaging, ‘reach out and touch it’ quality. The RP10 resolves so much detail without grain, delighting listeners with new information extracted from those familiar grooves. The musical experience is so much more involving and persuasive—you do not want it to end. But these are mere words that pale in comparison to the actual listening experience. Understanding only comes from listening.

Reference Phono 10 – the product that triumphantly validates the superiority of analogue playback. Music in High Definition®.