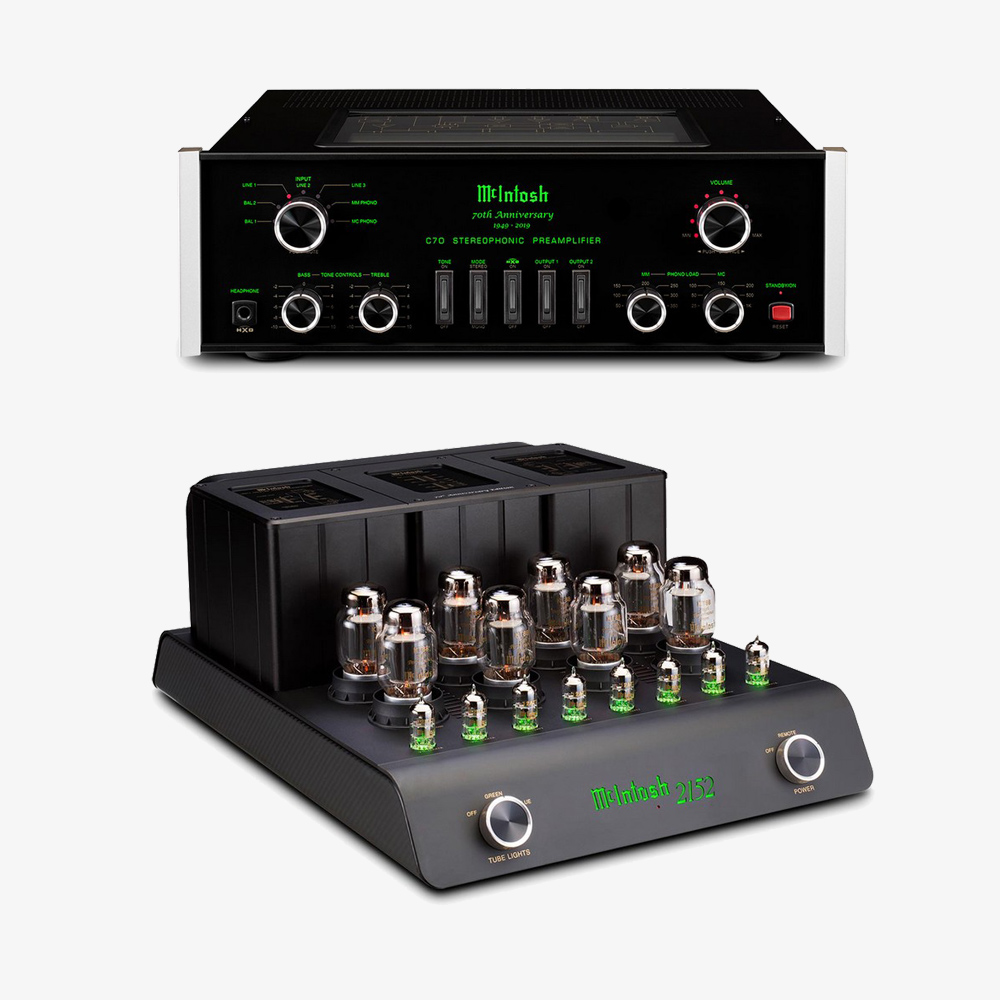 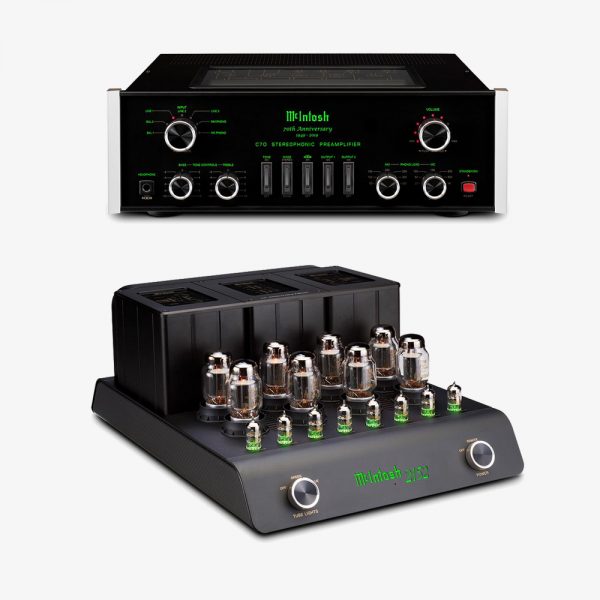 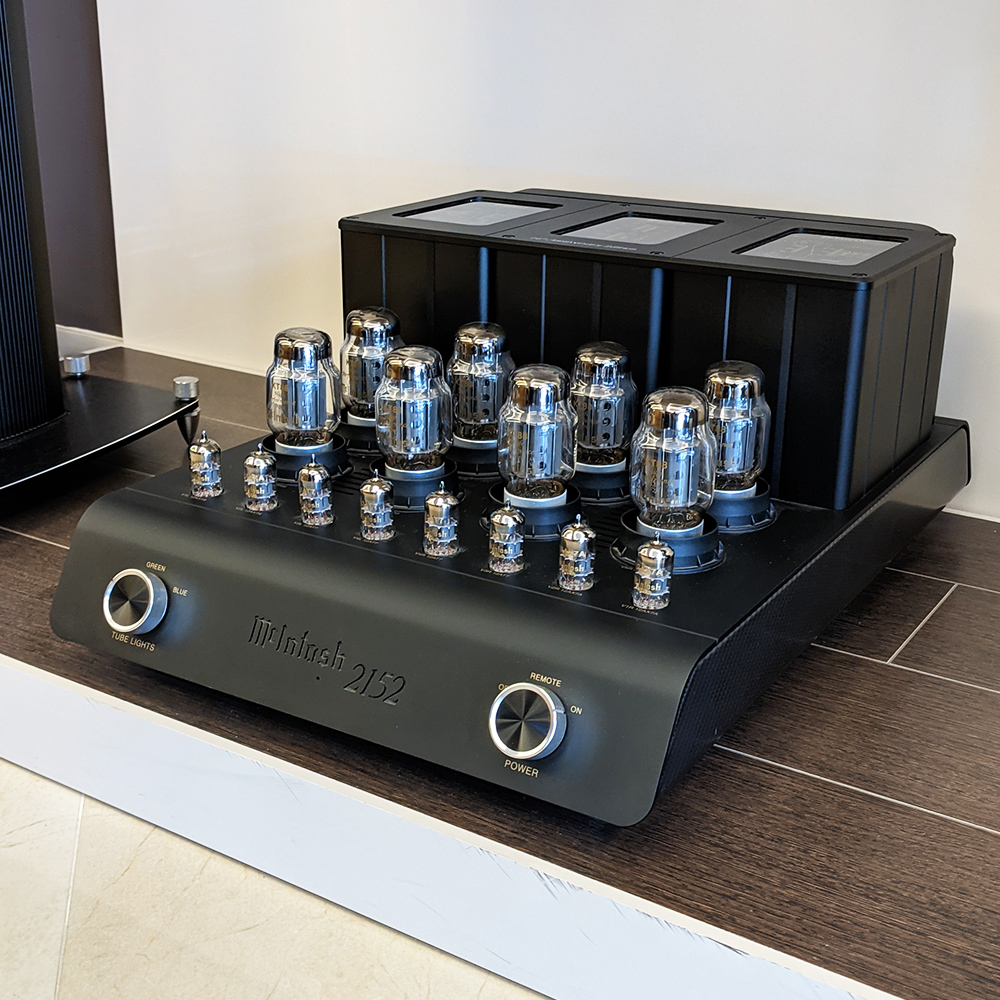 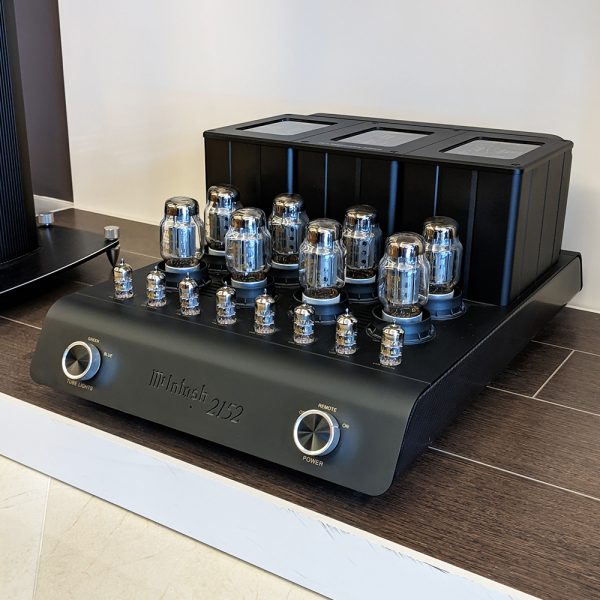 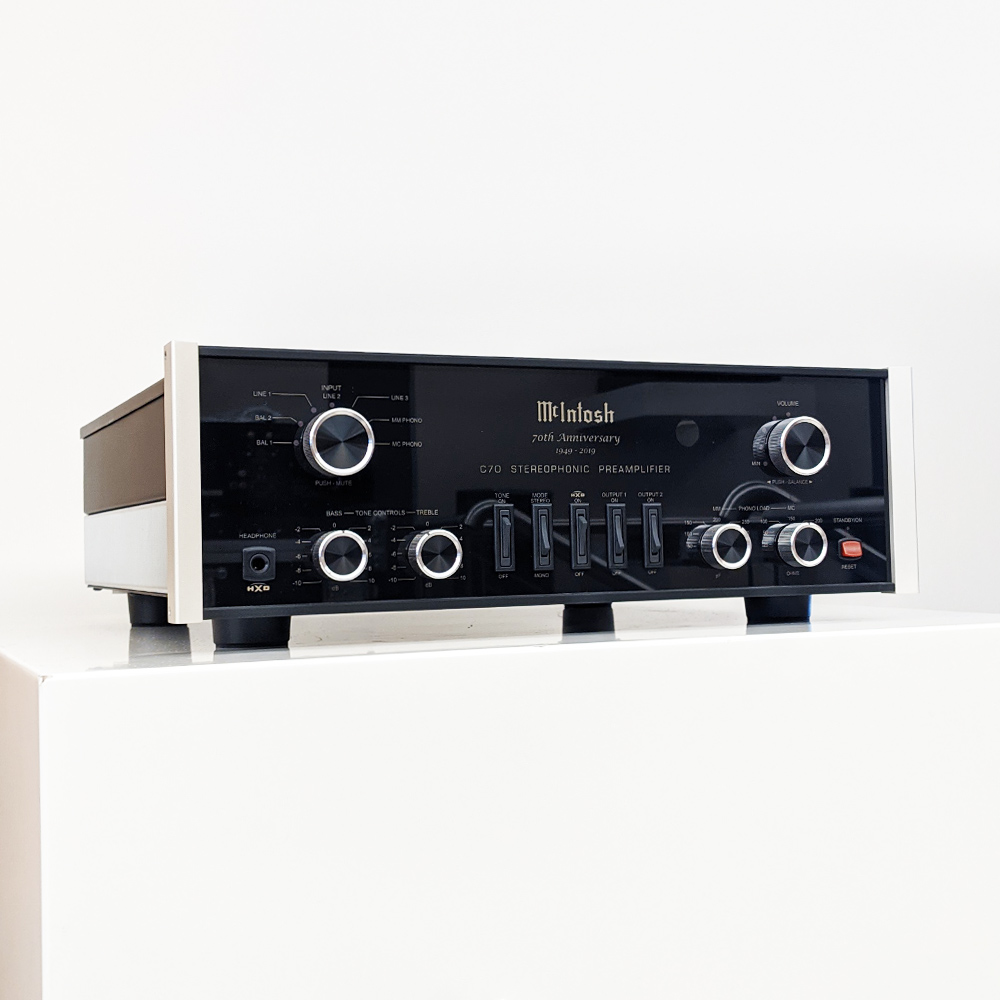 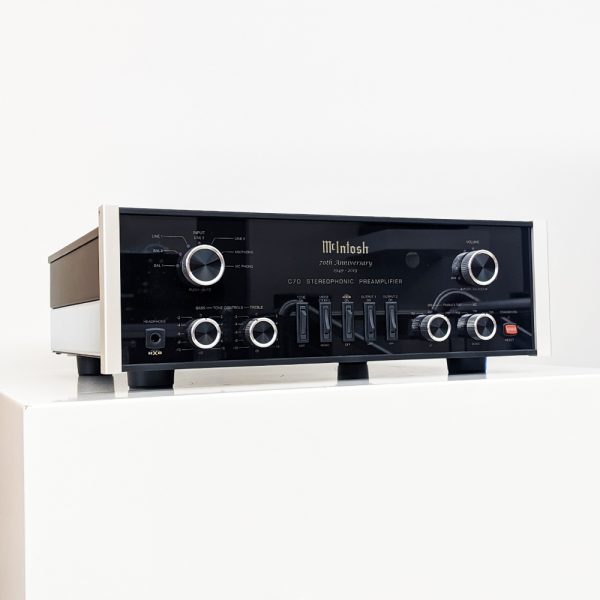 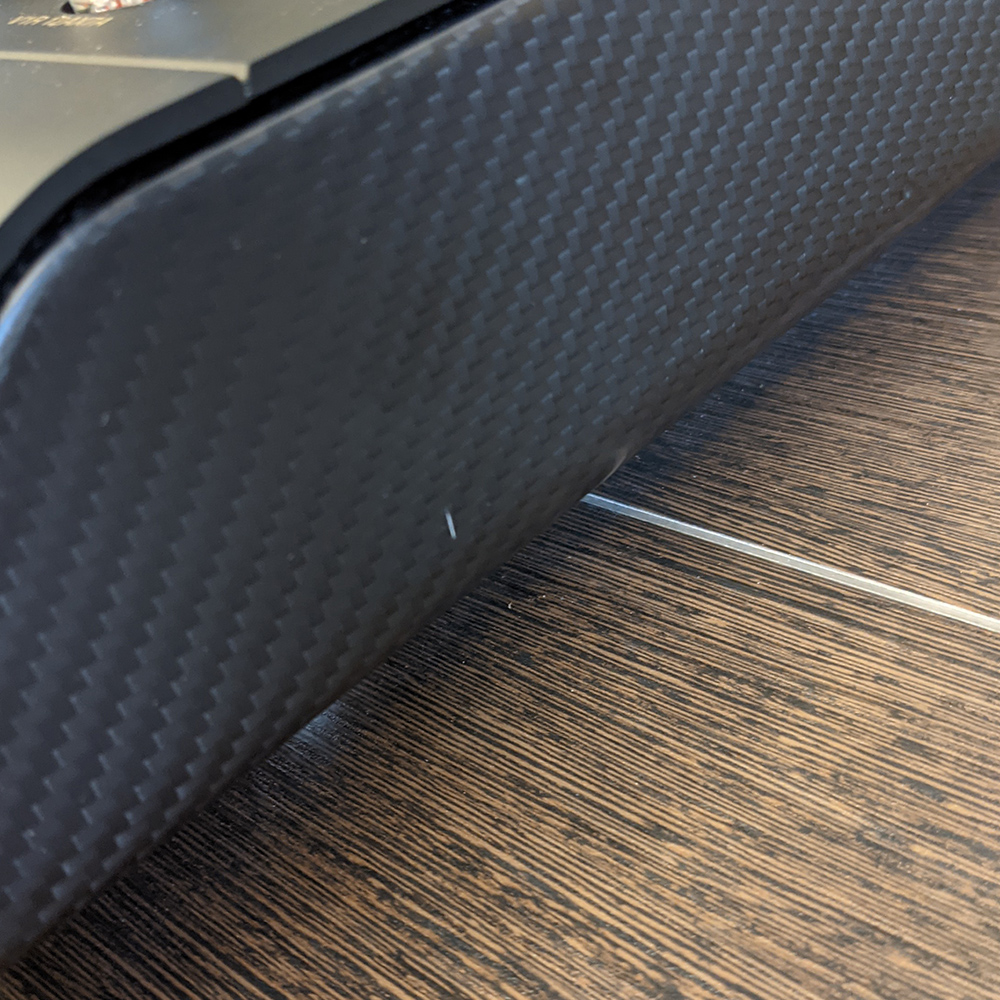 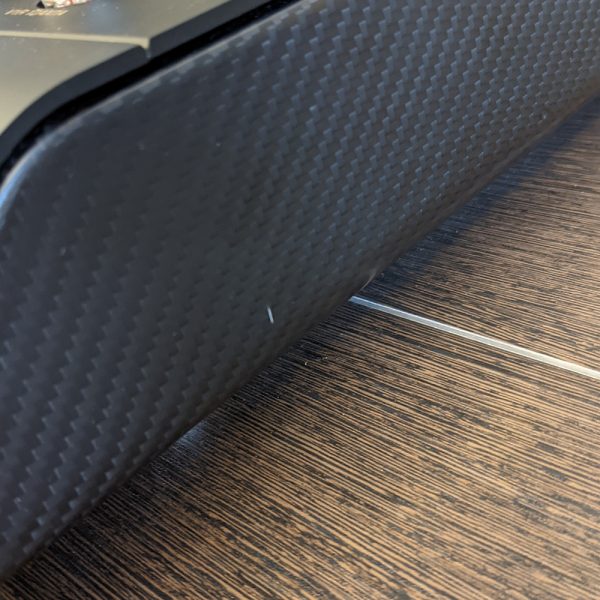 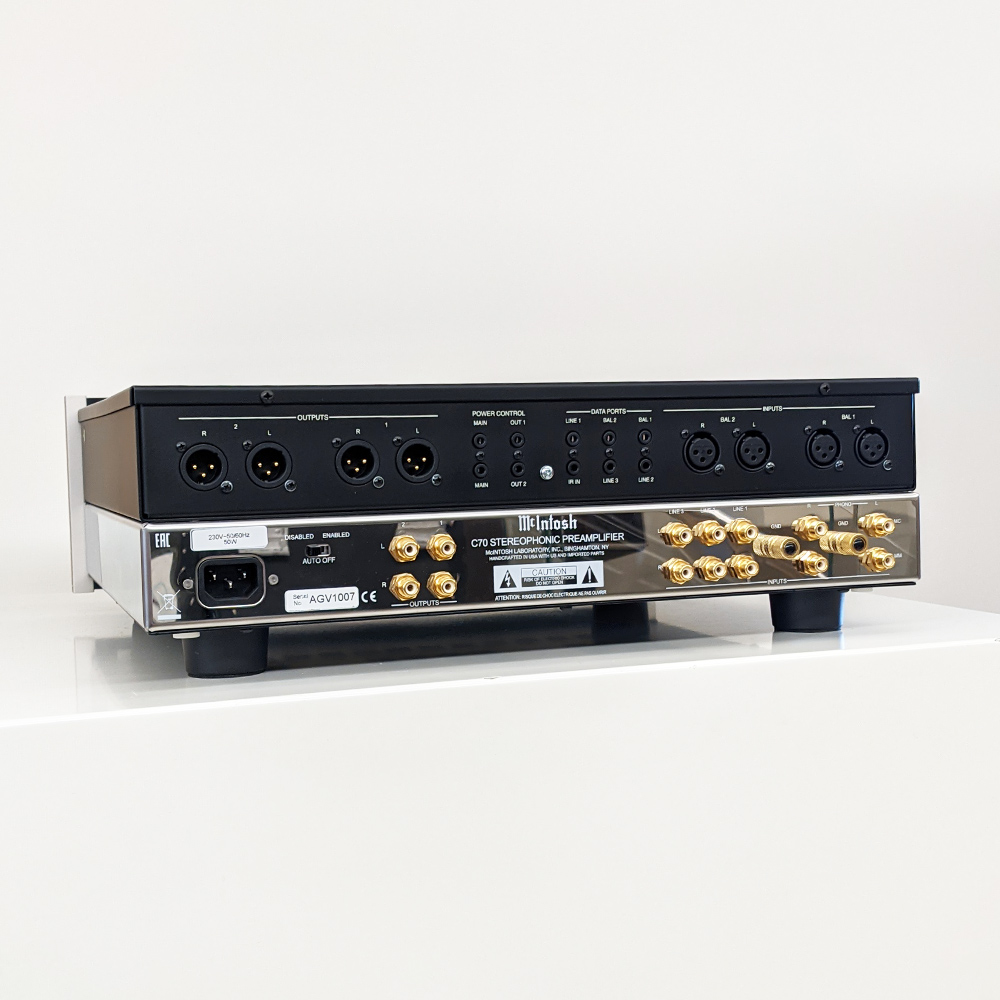 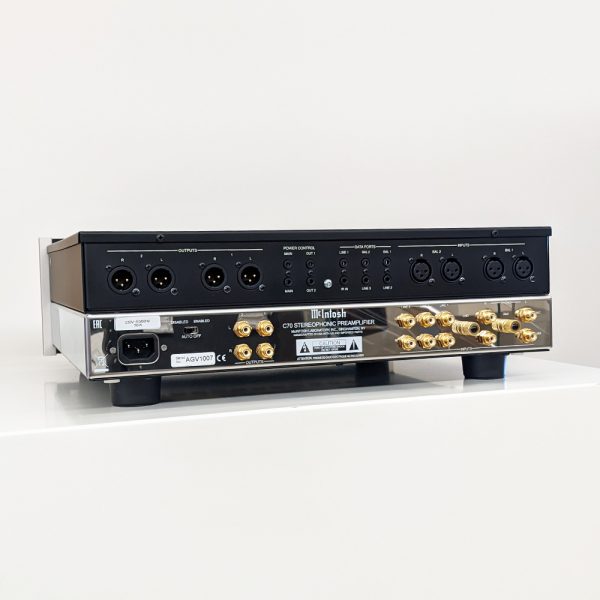 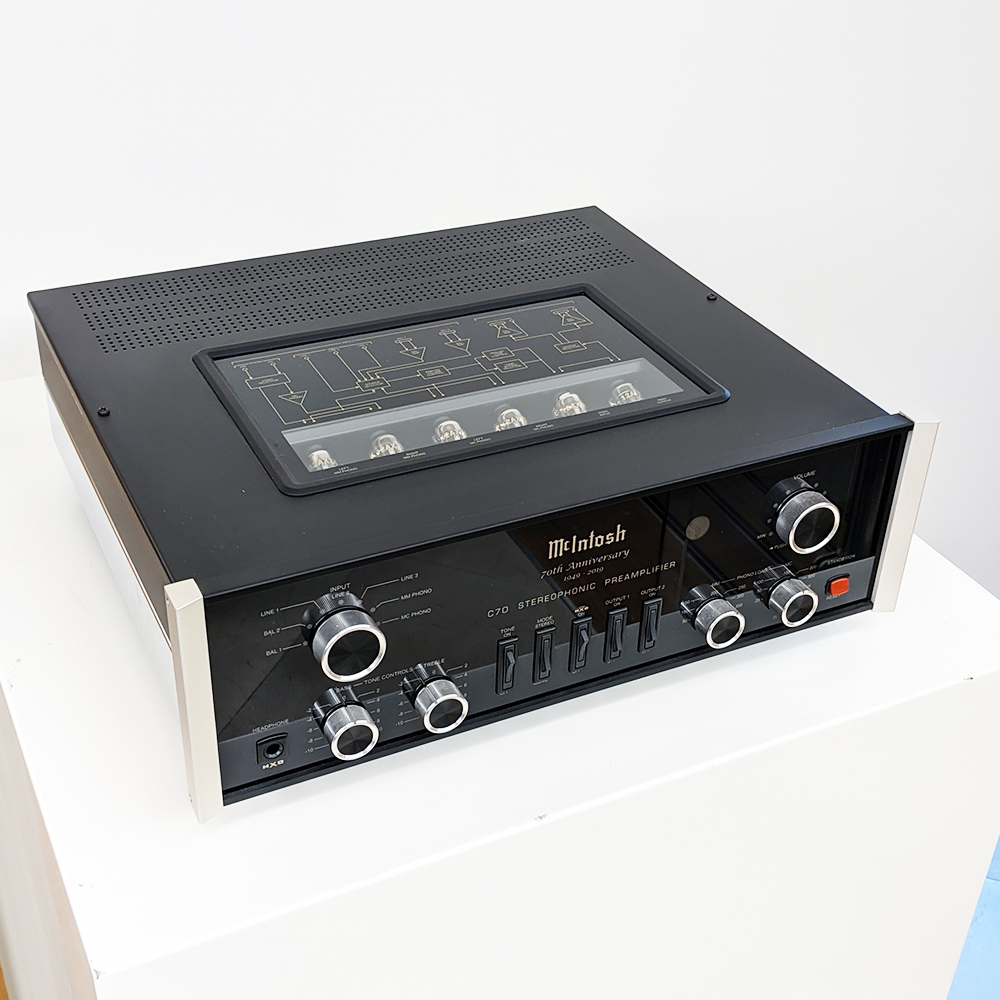 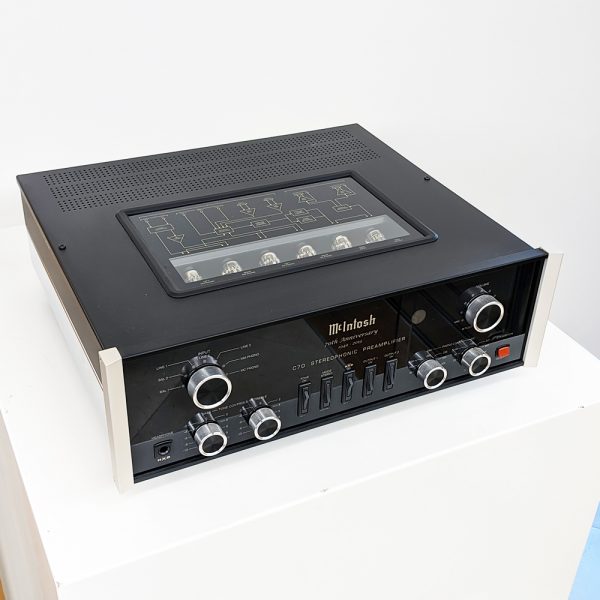 Ex-demonstration models. Limited edition products that were released their 70th Anniversary. Excellent condition and we have the original packaging and accessories. First purchased in January 2019 and has just under 1 year warranty remaining (3 years from Jan 2019). One small mark on right hand side of MC2152.

This is a great chance to get two iconic pieces of McIntosh history at a very good price. We are offering a special price for buying both pieces together.

The MC2152 70th Anniversary Valve Amplifier is a 150 Watt per channel stereo amplifier and features a striking new design to celebrate McIntosh’s seven decades of handcrafting some of the best home audio equipment the world has ever heard. While its design is new, the MC2152 incorporates the lessons McIntosh have learned and the techniques they’ve invented in their 70 years of audio engineering.

To the back are the two Unity Coupled Output Transformers with the power transformer cantered between them. All three transformers are housed in glass topped extruded enclosures displaying the wiring diagram for each transformer. A 70th Anniversary badge is laser engraved into the top plate of the enclosures.

The MC2152 uses eight KT88 output vacuum tubes plus eight small signal tubes comprised of four 12AX7A and four 12AT7 vacuum tubes; half of the tube complement is assigned to each audio channel. The 12AX7A vacuum tubes are for the Balanced and Input amps, while the 12AT7 tubes are for the Voltage and Driver amps. The LEDs under the eight small signal tubes can be set to three illumination settings: Off (which allows the tubes natural amber glow to be visible), Green or Blue – a new colour option unique to the MC2152. Our Sentry Monitor™ technology monitors the output current and shuts the amplifier off if it ever exceeds safe limits.

The C70 70th Anniversary Vacuum Tube Preamplifier harkens back to yesteryear with an all analogue design and a retro look.

The C70 features one 12AT7 and five 12AX7A vacuum tubes that are visible through a glass panel on the top cover. All control operations are done via knobs and rocker switches. Modern LED indicators will denote input selection and volume level. The C70 has seven inputs consisting of two balanced inputs, three unbalanced inputs, and one each of Moving Coil and Moving Magnet phono inputs. For outputs, there are two pairs each of balanced and unbalanced connections.

On the front panel, bass and treble tone controls are included and can be adjusted in 2dB increments via rotary knobs. Rotary knobs are also used to adjust the impedance and capacitance for the phono inputs. In addition to controlling the listening level, the volume knob can also adjust the relative volume balance between the left and right audio channels. A ¼” headphone jack powered by our High Drive headphone amplifier is included and features our Headphone Crossfeed Director (HXD®) technology. HXD brings added dimension to your music in a natural sounding way but can be turned off depending on your preferences. Five rocker switches are used to control the following functions: tone control on/ off; change between mono and stereo mode; HXD on/off; and to turn the independent output 1 and output 2 on/off.

The C70 sits atop a beautiful polished stainless steel chassis and features the timeless McIntosh black glass front panel, illuminated logo, control knobs, and aluminium end caps. Our Power Control technology is included with four ports that can automatically turn other connected McIntosh components such as amplifiers, CD players or turntables, on and off. Data ports are also present and can control basic functions of connected McIntosh source components via the C70’s remote control.